Not many island groups in Southeast Asia are untouched by tourism but Myanmar has one that is almost unexploited: the Mergui islands In the Andaman Sea, north of Thailand’s Surin and Similan islands, there spreads a vast archipelago of offshore islands which only opened up to tourism this century and is still very restricted. A marine wonderland, the area counts more than 800 islands ranging in size from Kadan Kyun – twice as big as Koh Samui – to tiny islets of rock.
Just about the only inhabitants are soldiers at the numerous islands which have been declared military zones – and the Sea Gypsies. The Moken, as these seafaring nomads call themselves, are the age-old denizens of these islands, traditionally living on boats, but now settling in seaside villages. 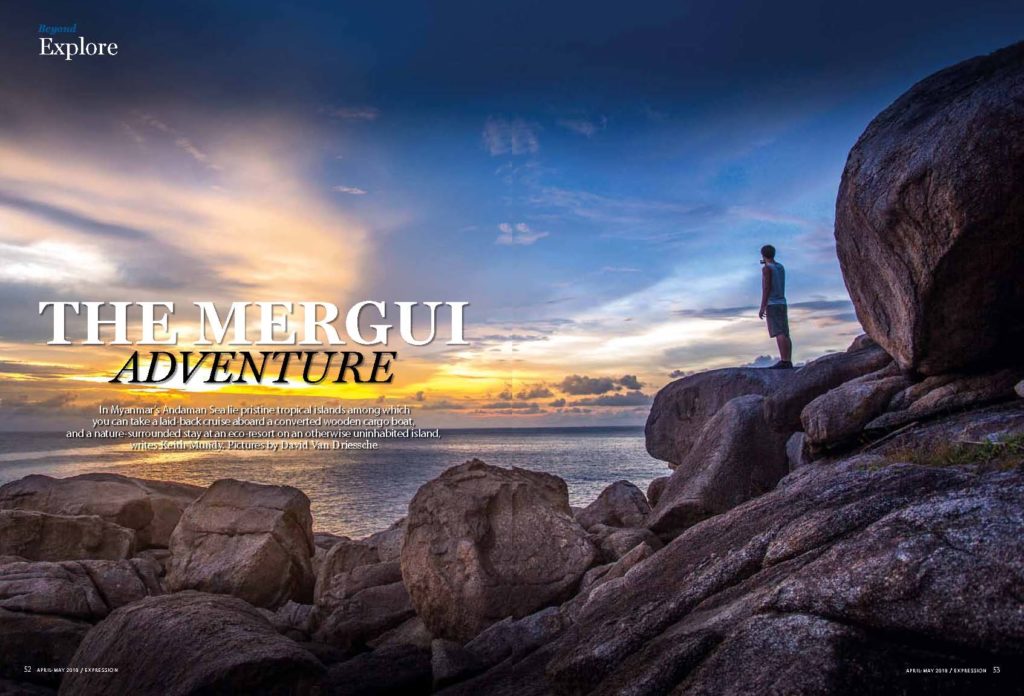 Thickly forested, with fine sandy beaches that only the fisherfolk have ever enjoyed, these islands are adventure territory. Once you enter this part of the world and begin to immerse yourself in this natural paradise, you feel the same sense of adventure the great explorers must have felt four or five centuries ago.
To access this hidden world from Thailand, you go to the Thai port of Ranong – with a visa prearranged online, or just your passport if you’re Thai (see more information in The Details). A guide from Moby Dick Tours will meet you at Ranong airport, the bus station or at your hotel, if you’re overnighting in Ranong, and take you through all the hoops, including a ferry boat ride to Kawthaung, the Myanmar port located across the wide estuary from Ranong.
First thing at Kawthaung, a bustling town, our group goes through Myanmar immigration at a dockside office, mercifully quickly. Then it’s back to the quay and there she is, our vessel for the next five days, the Sea Gipsy – a former cargo boat constructed of wood, remodelled into a cruise boat, painted green and cream.
The all-Burmese crew welcomes us aboard – cheeks daubed with yellow thanaka paste for cooling – and our guide Jojo shows us to our bunks, curtained sleeping places that open onto the gangways that run along each side of the boat. Simple and airy, laid with foam mattresses, equipped with fans, these are our homes for the next three days.
Soon we are out in the open sea, lying back in reclining chairs on the upper deck or getting to know each other around the long wooden dining table. Jojo – ever attentive – gives us maps of our route through the islands, where we’ll spend the nights at anchor, where we’re heading for eventually – Boulder Island with its eco-resort, one of only two hotels in all the islands.
Soon we reach our mooring for the night. Having skirted the seamount of James Patch and rounded the headland of Lawrence Point, names given long ago by the British admiralty, we have to in a sheltered bay between Hastings Island (Zar Det Aw in Burmese) and Barwell Island. Time to gather round the dining table for sundowners and a tasty meal cooked up in the galley below. 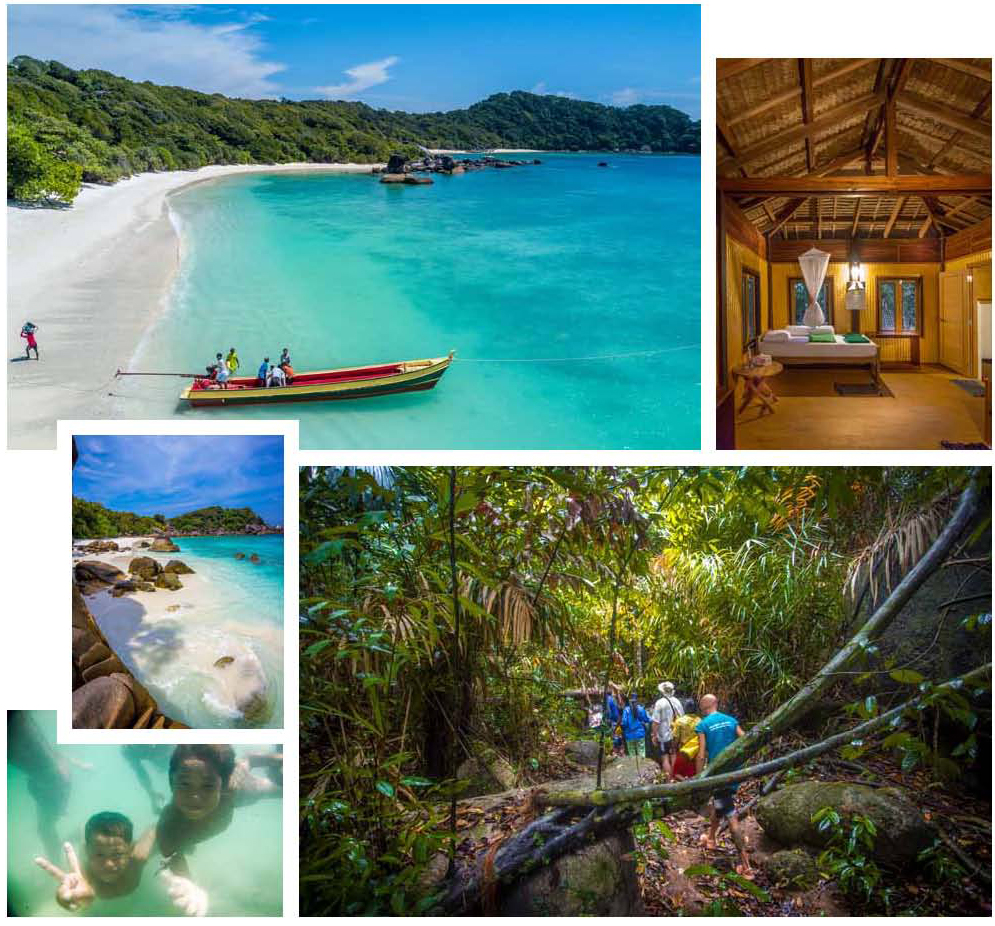 Early next morning, vibrations massage the boat as the engine kicks in, and we chug forth across a wide open sea, taking breakfast on the upper deck in the bright sunlight. Around midday, we sight a little island with a gorgeous white beach and anchor just offshore.
It’s prosaically called 115 Island but it’s sheer poetry, to which we swim with alacrity. The Sea Gipsy’s rubber dinghy follows us with snorkelling gear, and we splash around over the pretty coral that lies just off the beach. Keith from New Zealand prefers kayaking and paddles leisurely round the bay. He kayaks so much on this trip that he garners the nickname “KKK” standing for Kiwi Keith Kayak (and not any white supremacist tendencies, mark you).
The dinghy has now brought lunch, and we tuck into a fresh seafood picnic on the snow-white sand, then take the dinghy back to the Sea Gipsy. Cruising northwestward we pass the long low profile of Shark Island, then circle Great Swinton Island in the multicoloured sunset, dropping anchor for the night on its south side at Iguana Bay.
By this second night, we’re all pretty familiar with each other: eight Westerners, seven males and one glamorous and outspoken German lady. Dinner is jolly as well as tasty. Bjorn Burchard, boss of Moby Dick Tours, is one of the party, and he gives us plenty of insights into the archipelago.
He says about half the islands are off-limits, declared military zones, but that they’re not actually very militarised, with just simple camps of soldiers on some of them. He also tells us that, though the islands are all densely forested, many have been plundered of their most valuable trees in selective logging. Damage to the marine environment has occurred too through the horror of dynamite fishing, but this has now been banned.
In other words, the Mergui Archipelago is not without sin, but is still amazingly unexploited in most respects – amazingly because the coasts of Southeast Asia have been prime tourism territory for three decades now. Myanmar’s islands have escaped depredation through its military regime’s long policy of isolation and strict control, which has only recently eased. 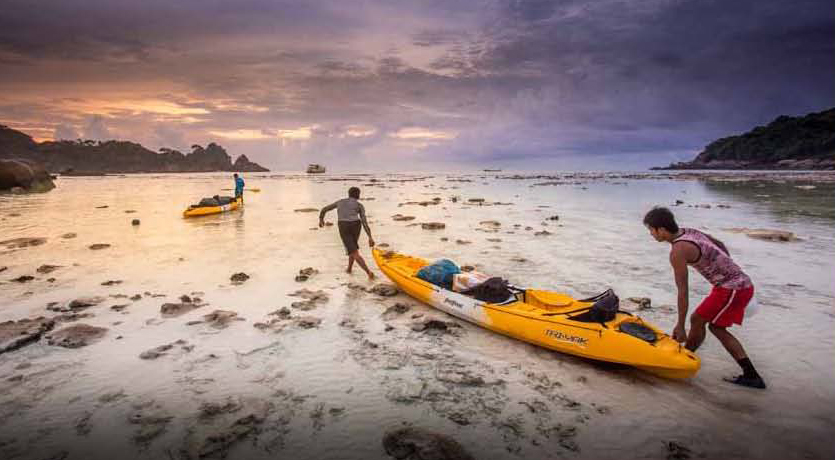 It’s those restrictions, paradoxically, that have allowed the Sea Gypsies to roam the Mergui Archipelago with far more freedom than in the Thai islands to the south. Now we head to a seaside village of the Moken on Jar Lann Kyun island, which the British grandly dubbed Lord Loughborough Island.
While we’re still 100 metres from the jetty, a flotilla of canoes comes out towards us, rowed by little girls. It seems the boys are out fishing with their fathers in the big boats, and so the girls show us their seafaring skills. We roam about the village for a while, a ragtag bunch of huts on stilts above the shore, with friendly faces greeting us. Fish are laid out to dry on the jetties, and others are kept under ice, to be sold to the mainland.
Only in this century have Myanmar’s Moken taken permanently to the shore like this; before they would live on their roofed boats, moving from fishing ground to fishing ground, beaching the boat on some shore for the night. Some still do, but they are decreasing with each year.
Now we sail towards our island resort and after a couple of hours we chug into a beautiful sandy bay backed by forest and bordered with a stonescape of grey rock and boulders sculpted by nature – Boulder Island, or Nga Khin Nyo Ghee in Burmese.
But where’s the hotel? All we see is an unbroken line of trees behind the beach – but as we jump out onto the soft white sand and walk towards the trees, wooden bungalows begin to appear amongst the foliage.
Keeping a low footprint, Boulder Island Eco- Resort follows strict environmental principles, built with local materials, powered by solar panels and serving locally sourced food. When you go trekking through the dense forest cover, you follow beatenearth paths that are not clear – so you must have a wilderness guide from the resort staff to show you the way.

Moken Bay on the far side of the island is the best destination, for its beautiful coral reefs. We take the boat there, accompanied by two marine biologists who are staying at the resort to do a long-term project. The pair give us a little seminar in the water before we go off snorkelling.
Each night in the lounge, cooled by sea breezes, we watch fascinating documentaries on a big screen about the local marine life and the life of the sea gypsies.
And on the sixth morning we have to take the voyage back to Kawthaung, on a cloudless day in calm seas, stretched out on the sundeck loungers, carefree upon the Andaman Sea.
The whole six-day “safari”, we met a handful of fishing boats and one yacht. In this highly controlled archipelago, you have the experience almost entirely to yourself – a rare thing indeed in Southeast Asia’s seas. 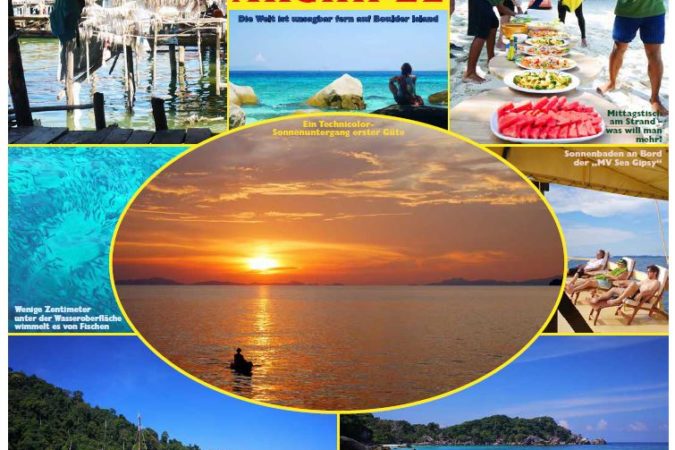 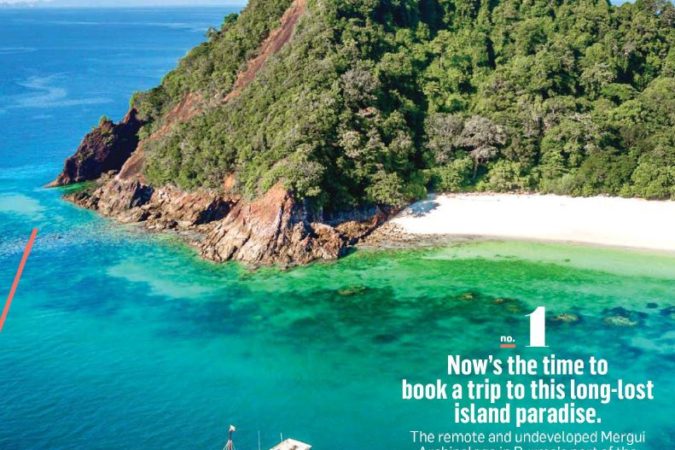